From tornadoes, blizzard to lightning with snow; the storm that brought it all

A major Low pressure system brought all kinds of conditions to the United States and Canada over the last few days. On Saturday, tornadoes were spotted in Mississippi (shown below), which caused damage in Columbus, MS and one fatality.

The NOAA Storm Prediction Center had issued a MODERATE risk of severe thunderstorms (see below) for areas of northern Mississippi into Tennessee, with 15% chance of tornadoes for the area.

TORNADO REPORTED IN DOWNTOWN COLUMBUS WITH DEBRIS NOTED ON RADAR. 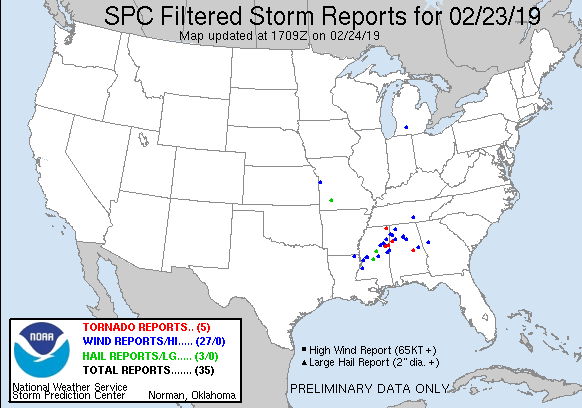 Below is the morning surface analysis depicting the significant Low pressure and its associated cold front, which extends from the Great Lakes to the Gulf of Mexico. This cold front will be bring damaging wind gusts to southern Ontario this afternoon and evening.

A impressive lightning shot has emerged from New York state this morning as thunderstorms rolled through the area (see below). Here you can see lightning striking Lake Ontario, with snow on the ground! This was taken Sunday morning at Sodus Point, NY.

Below is the current radar (at noon eastern time), depicting a thunderstorm moving towards Buffalo, NY:

Love what we do? You can become a supporter here: https://www.patreon.com/NZPChasers