At 455 PM EST, a large and extremely dangerous tornado was located near Perry, moving east at 50 mph. This is a PARTICULARLY DANGEROUS SITUATION. TAKE COVER NOW!

ABOVE: Valid 032128Z - 032230Z (no longer valid) The severe weather threat for Tornado Watch 8, 9 continues. SUMMARY...Significant tornado potential appears greatest in the vicinity of the warm frontal zone across central GA during the next 2-3 hours. The tornado risk will likely increase near the GA/SC border coincident with the intense supercells over central GA moving into the Savannah River Valley. DISCUSSION...Radar mosaic shows numerous warm sector supercells across southern and central GA. Surface analysis indicates a 1006mb low near Columbus, GA with a nearly stationary warm frontal zone extending east from the low to 15 mi south of Augusta. Tornado potential appears to maximize in central GA with the ongoing mature supercells with experimental tornado guidance (conditional on a tornado) indicating damage intensities associated with likely wind speeds in the 80-140mph range with the storm moving from Taylor into Macon County as of 2125z. Farther east over east-central GA into adjacent portions of SC, model guidance shows a substantial strengthening of flow in the 850-700mb layer between 4pm EST and 7pm EST over the eastern GA/SC region. Coincident with the strengthening flow fields will be the supercell activity moving into the region from the west. As such, the risk for tornadoes will accompany this activity in the warm sector ahead of the surface low expected to develop to near Augusta by 7pm EST.

ABOVE: A TORNADO WAS SPOTTED WEST OF BYRON NEAR HWY 49 (MM 8). OBSERVER REPORTED IT WAS A SMALL TORNADO AND LIFTED AROUND 3:25PM. 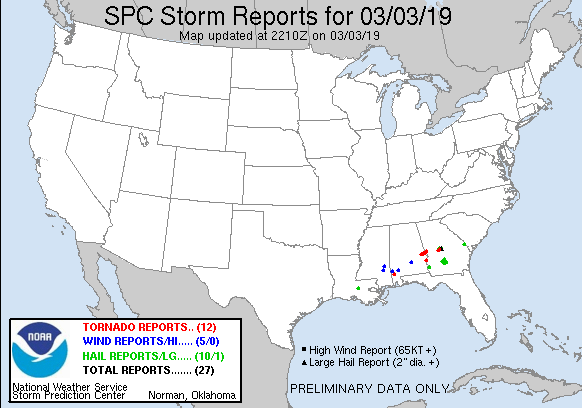